Ever wondered what it was like to create a full project of cosplaying and photography in less than one week? Brace yourselves as I tell you the story of how I managed to make a cosplay dress for the Ruby of the Sea right before christmas.

The Ruby of the Sea is a character from the Dungeons and Dragons show and podcast Critical Role. She appears as a secondary character, mother  of Jester, one of the main characters. In this fantasy setting, the  Ruby of the Sea, also known as Marion Lavorre, is a red tiefling, an incredible singer and famous courtesan. Marion is one of my favourite character from the show. I had already cosplayed her in October for MCM comic con London and I was planning to  make new outfits for her.

As Christmas grew near, I saw a lot of pictures of cosplays of other Critical Role cosplayers all around the world wearing Chistmas-inspired outfit. 4 days before Christmas,  I realized she would be the most fitting character for a pin-up santa dress photoshoot since her features always made me think of Dita Von Teese. After a quick tweet adressed to Matthew Mercer, the show’s DM and creator of this character, he encouraged me to do so and I was now with a full project I had to lead in less than 3 days if I wanted to post the pictures at the right time. 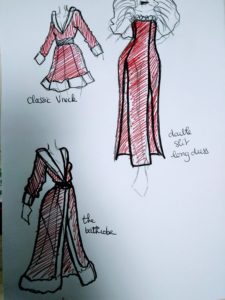 The most complicated part was to come up quickly with the design of the dress I wanted to make for the occasion. I first checked what fabrics I already had in order to start as soon as possible. I was relieved to find I still had burgundy polyester crepe left. The fabric is very light with a nice tombé and is still resistant and opaque enough to make a simple dress out of it.

I spent a long time looking for inspiration. I wanted something classy, but sexy, to match the Ruby of the Sea. I looked into pin up photography and illustrations, but the short skirts did not really match the idea I had in mind.

I drew a few different designs for the Ruby: short, long, a robe. I already had a favourite, but I asked on twitter and tumblr what people liked the most and my favourite won the poll. I only had to get started.

The design I chose was a strapless dress with double slits for the thighs and a white faux-fur shawl. During the sewing process I realized I didn’t want to use boning for the bust part of the dress and ended up adding two very thin straps to the top so it would stay up for the photoshoot.

By the time I had to begin cutting the fabric, I realized I was missing my base pattern for the top. I had to make a brand new pattern from scratch, just in case I would need it later, and also because the strapless top pattern was a modification of it.

I used my favourite book for patternmaking to make the bust part out of my base pattern. 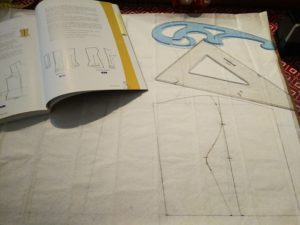 For the bottom part, I had a very clear idea of what I wanted. I needed two panels of fabrics, a narrow one of the front part, to cover half of the legs and the front, and a larger one that should overlap at the front with the first one. I made a quick sketch of the shapes I needed to cut, taking into account that the fabric I owned was only 115cm wide instead of the usual 140cm.

I managed to find at the last minute white faux-fur with long hairs for my shawl (and ended up with white hairs all over my living room right before christmas). I used a simple white cotton for the lining. 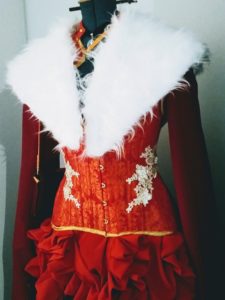 Once I gathered all the material and cut the fabrics came the sewing part. The top was lined with the same fabric as the top since I was supposed to wear it without a bra and I wanted to make sure it’d be opaque. It allowed me to make french seams finishes on the inside and  was pretty comfortable.

I added a zipper at the back of the dress since  it was made to fit very tightly and the fabric wasn’t stretch at all. I  added a thin band of white faux-fur on the edges of the straight neckline and added straps on the shoulders after that. I finished sewing on the 24th of December a few hours before the family gathering  at my place. Time to clean the room of the leftovers of white faux-fur!

And here I was, with my finished last-minute dress, with about 30 hours to shoot it and edit the pictures before the end of the 25th of December…

The next article will be about the photoshoot and editing part! The results can be seen in my Photography portfolio 😉